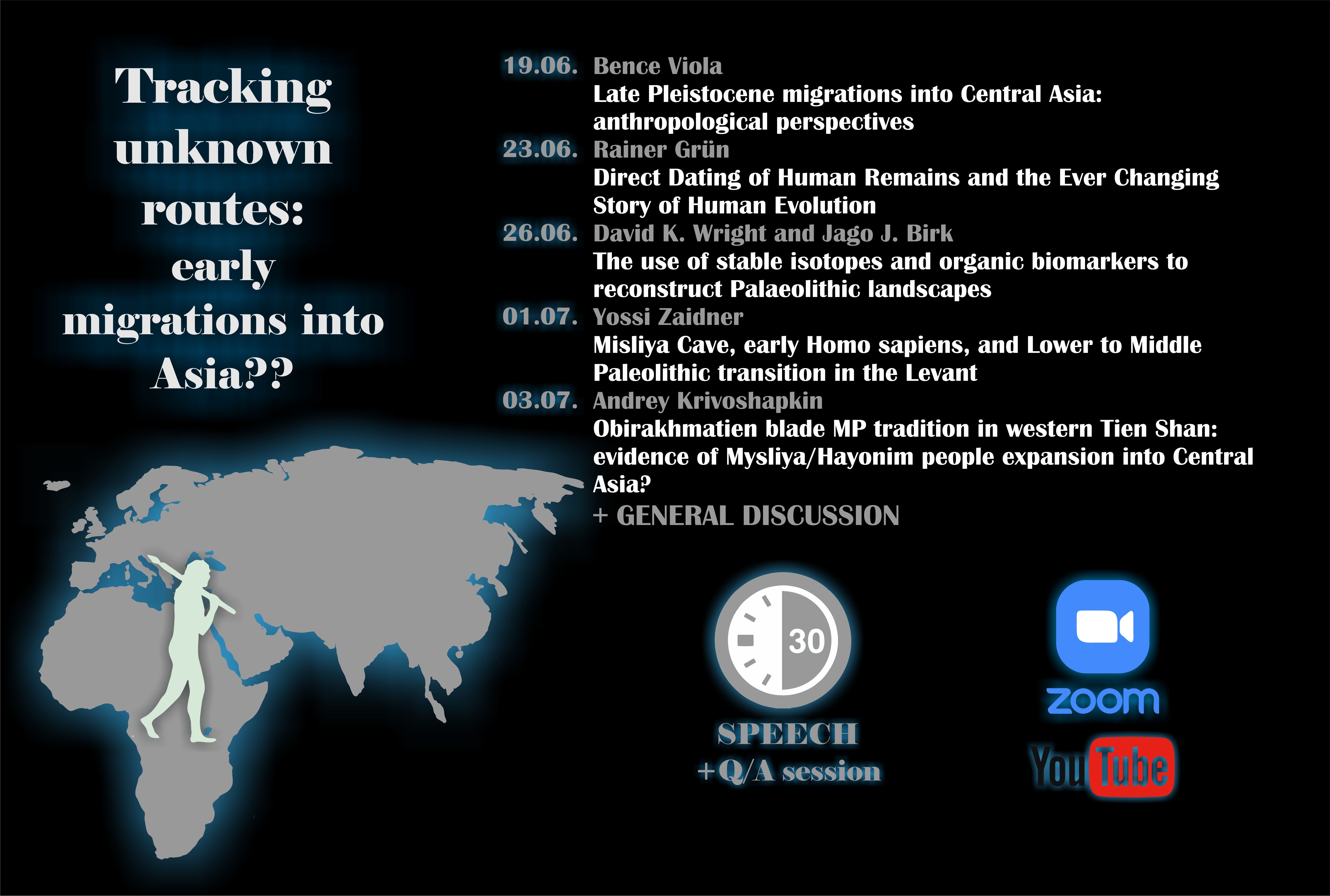 Institute of Archaeology and Ethnography SB RAS and Lomonosov Moscow State University are pleased to announce the start of the online workshop  «Tracking unknown routes: early migrations into Asia??»

Topic: Late Pleistocene migrations into Central Asia: anthropological perspectives
Central Asia is a key region for understanding our past, due to the presence of several hominin populations during the Late Pleistocene. The fossil record from the region is still quite limited, but combined with genetic analyses they give us an insight into the migrations and interactions of these populations.

Topic:  Direct Dating of Human Remains and the Ever Changing Story of Human Evolution

The development of nearly non-destructive dating has given access to many human fossils. The results have contributed to some major revisions of the chronology of modern human evolution. The dating of Irhoud pushed back the age of the earliest Homo sapiens to around 300,000 years ago. Direct dating also demonstrated that anatomical associations, for example for Homo floresiensis or Homo naledi, may lead to erroneous age assessments. This presentation will give an overview of the results published in the last three years, showing that the phylogenetic tree of humans has gained considerable complexity. It can be expected that new discoveries in geographical areas that have not yet seen systematic investigations will further contribute to the complex and exciting story of human evolution.

Topic: The use of stable isotopes and organic biomarkers to reconstruct Palaeolithic landscapes

The integration of organic chemistry into the archaeological toolkit to understand landscape formation processes has increased in recent years. It is now understood that the boundaries between humans and the landscapes they inhabit are tenuous. As humans gained increasing mastery of their physical environments through the use of tools, they have interacted uniquely as apex predators and niche constructors. Controlled use of fire, in particular, has transformed earth’s ecology at the hands of humans by changing the timing and extent of burning, which has selected for different flora and fauna in the regions humans inhabit. However, archaeological evidence is spotty and it is therefore difficult to definitively connect landscape changes with human agents as opposed to natural climatic variability. In this talk, we discuss methods from organic chemistry that can be applied to better understand palaeolithic demography in the context of ecological change. After an overview of methods, we provide an example from our recently begun collaboration in northern Malawi in which we will develop a time-transgressive view of human ecology in the region using organic biomarkers and stable isotope analyses.

The Lower to Middle Paleolithic transition is associated with major technological changes (e.g., the emergence of Levallois technology) among human populations in Africa, Europe, and the Near East. Was this transition a gradual and continuous process or a sharp change associated with the arrival of new populations is still hotly debated. Misliya Cave is one of the few sites that documents this transition in the Levant. In this talk, I will present the late Lower Paleolithic (the Acheulo-Yabrudian techno-complex) and the Early Middle Paleolithic record of Misliya Cave and discuss it within the framework of the late Middle Pleistocene archaeological record of the Levant and beyond.

Dr. Andrey Krivoshapkin, Institute of Archaeology and Ethnography of the Siberian Branch (Russia)